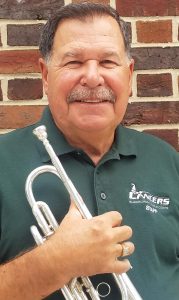 Performing as a soprano soloist and horn instructor for Hanover Lancers and Lancers Alumni Corps since 1974 is just part of Rick Anderson’s musical legacy. While serving on the Lancers’ board of directors he has worked to insure membership growth, encourage participation in events far outside the community and is the backstage director of Profiles in Music, the Lancers perennially sold-out alumni show held on the Penn State University campus in York.

He is a member of Phi Beta Mu, a national honorary bandmasters association. One of the founders of Youth Music Abroad, he has toured Europe with young musicians. He has also traveled nationally and internationally as a professional entertainer and musician.

He completed his undergraduate work at the College of Wooster with trumpet studies at Oberlin Conservatory of Music. He studied orchestral directing with Stuart J. Ling and Marshall Haddock. He pursued graduate work at Pennsylvania State University, where he earned a Master’s Degree, and also studied at Towson University.