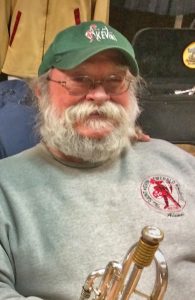 John Curran has been associated with many of the top corps from New England, including the Princemen, the Renegades, the Legends, Cambridge Caballeros and St. Kevin’s Emerald Knights. He has been part of the Connecticut Hurricanes’ organization since 1974. During this time, he has played soprano and baritone horn as required, driven the equipment truck, lined up practice fields, driven members to and from practice locations and bus departure locations and helped support staff operating the booster table. For several years, he marched in the Macy’s All Star Drum and Bugle Corps in the annual Thanksgiving Day parade. He has been a horn instructor, marching instructor and guard and drill team instructor for several corps and a drill designer for several Connecticut high school bands. He has been on the staff of Winter Guard International (WGI) since 1979, participating in regional and world championships each year. He is also member of the Massachusetts Drum Corps Hall of Fame and Connecticut Hurricanes Hall of Fame.