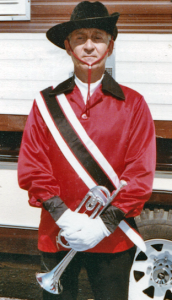 Vince D’Agostino served in just about every position available with Archer Epler Musketeers in two separate periods. From 1947 to 1957, he played second soprano and served as quartermaster. In a second period of association beginning in 1975, he played soprano, served on the board of trustees, marched in the honor guard, served on the Great Alliance of Seniors (GAS) steering committee and sang in the chorus. His drum and bugle corps activity dates back to 1935, with the Upper Darby junior drum and bugle corps. He was associated with the Audubon Bon Bons parents’ association from 1962 to 1966. He was a long time active member of Archer Epler American Legion Post 979 and the Tri-County Veterans Association. After he passed away in 2005 he was named a posthumous member of the Pennsylvania Drum Corps Hall of Fame. His last performance with his corps was at the 2005 GAS reunion, just three weeks before he passed away with pancreatic cancer. His career in the drum corps community extended over 70 years of activity, continuing until he was well into his eighties when he helped run the Tri-County Veterans Association Post Home.