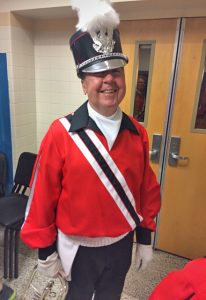 In 1959 Dan Fitzpatrick became a charter member of the Golden Rays Junior Drum and Bugle Corps of Stoughton MA, starting on straight (valve less) bugle. He later played baritone, then French horn, then mellophone. He joined the United States Marines Corps (USMC) in 1967 and in 1968 was assigned to the USMC Drum and Bugle Corps in Washington D.C., performing with them until 1970 as a French horn bugler. While stationed in Washington he also performed with the Yankee Rebels Drum and Bugle Corps in 1970 in the same capacity. After he completed his enlistment he continued with the Rebels as a mellophone player in 1971 – 1973 and 1976. In 1975 he joined the Archer-Epler Musketeers, who had recently reformed in order to perform in the 1976 Bicentennial Parade in Philadelphia. Archie kept going after that and he played with them until 1981 and from 1984-1995. In 1988 he joined the Reading Buccaneers as a French horn player. He also marched with the Bucs from 1993 to 1996, and 1999. In between, in 1990, he filled a spot with the Sunrisers. In 1996 he began playing with the Buccaneers Alumni, and continues to this day as a mellophone player. He also played with the Yankee Rebels Alumni Corps for several years between 1996 and 2012. He served as brass arranger/instructer for the Haddonfield, New Jersey Royaleer Mounties from 1974 through 1976 and for the Philadelphia, Pennsylvania St. Rose of Lima in 1976 and 1977. He served as Reading Buccaneers business manager in 1996 and as their assistant director in 2002 and 2003. He was inducted into the Pennsylvania Drum Corps Hall of Fame in 2005. In 2013, he was inducted into the Buglers’ Hall of Fame. He was elected Archer-Epler Musketeer of the Year in 1984, Reading Buccaneers’ Most Valuable Member in 1995 and 1996, and received the Reading Buccaneers Director’s Award in 1999. He won Drum Corps Associates (DCA) Individual and Ensemble competition on mellophone in 1998, and seven other years on French Horn.