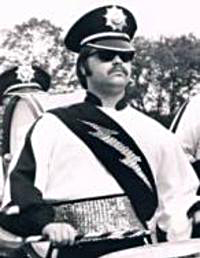 Tom “Gabby” Gabianelli is a natural born Hurricane. His father, also known as “Gabby”, first joined the Corps in 1938, so as one would presume, some of his earliest memories were centered on drum corps. Gabby’s early interest drew him to become a drummer, which he began learning through participation in the Seymour Middle School band program. In 1963 he joined the Oxford Explorers and for two years honed his drumming under the tutelage of Jim Dugan Sr., and in 1965 he moved to the Connecticut Royal Lancers were he began a long association with Hall of Fame instructor, Ray Luedee. Tom made the jump to the Hurricanes in 1966. Shortly thereafter, his Hurc career was put on hold by a four year hitch in the US Navy. Upon discharge, he returned to the Corps and drummed in those fabulous Luedee lines of the 70’s for six years, through 1976.

In 1977 Tom returned to a Corps in transition, assuming a duel role as business manager as well as assistant director and was instrumental in formulating a re-building plan. He became Director for 1978 and remained on the Board of Directors through 1983. Tom returned to the Corps in 2002, playing pit percussion, and in 2003-04 he filled a horn spot and actually learned to play the soprano in the process. He was named “Hurricane of the Year” for 2004. In 2003, Gabby again returned to the Board table and was elevated to President of the Hurricanes, beginning in 2005.

Gabby immediately got to work and undertook a course that, in his vision, would return the Hurricanes to a place of prominence in the drum corps world. By 2007 the Corps had been outfitted with new drums and pit equipment, new horns and new uniforms. Guided by a world class staff and membership full to capacity, Gabby’s vision bore fruit in 2008-’09 with the Hurricanes posting eight 1st place finishes as well as five 2nd’s in addition to returning to the coveted “top five” in DCA championship competition with two 4th place finishes.

The Hurricanes, through the guidance of Tom Gabianelli, became rejuvenated, with a 21st. century agenda, with a vigor and enthusiasm, not unlike what must have been felt in 1932 or in other restructuring periods e.g. 55’…77’…and 90’. Gabby’s revamping of the organization, from top to bottom, has poised the Corps for future successes well into the future and beyond.