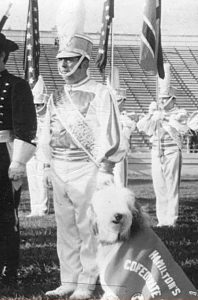 Joe LaLiberte was involved with the Rhode Island Matadors and then marched with Yankee Rebels for about 10 years, while he still lived in Framingham, Massachusetts. Long time Yankee Rebels corps director George Bull said he never heard Joe complain about the many miles driven each weekend, nor does he remember that he ever missed a turnout. The Yankee Rebels disbanded in 1976, and Joe became a dedicated alumni member when the corps was re-formed for the purpose of marching in the 1988 American Legion national convention parade in Baltimore. Organizer George Bull expected responses from about 20 former members. Instead, there were 90 horn players, 40 battery, 40 color guard with no instruments or equipment. Joe quickly located a Legion Post that formerly sponsored a junior corps. He and his son Jay crawled through attics, basements, and much debris to retrieve instruments. The cost for 49 bugles, two snare drums, 10 bass drums, six cymbals, flags, poles, everything the alumni corps needed, was $750. Without Joe LaLiberte’s dedication to the Yankee Rebels, the alumni corps (now in its 19th year) would have not gotten off the ground.