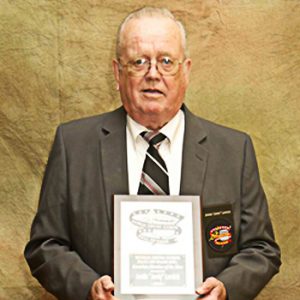 Eighty year old Jordis (Jordy) Larvick is the sole marching member remaining from the inaugural group that started the Williston Cowboys American Legion Drum and Bugle Corps in Williston, North Dakota, in 1954. His lifelong friend and teacher Virgil Syverson, also inducted as an associate member of the World Drum Corps Hall of Fame in 2001, founded the Cowboys and directed the corps for more than 50 years before passing away. Jordy Larvick, who served in the United States Army as a young man, played bugle Taps as part of the military honors provided at the funeral. He has also been been honored by the American Legion and Bugles Across America, the not-for-profit group that provides uniformed military people to fold the flag and play Taps at funerals of veterans. He received a remembrance citation and medal from Bugles Across America. The citation reads, “This is to certify that Jordis A. Larvick has been honored as a distinguished individual of the United States of America. This certificate is awarded as a testimonial of Honest and Faithful Service. Bugles Across America.” On the same evening, he received a plaque designating him American Legion Edgar M. Boyd Post 37 Legionnaire of the Year. His love of drum and bugle corps activity is contagious. Two of his three children played with him in the Williston Cowboys. Jon A. Larvick, Colonel United States Air Force (ret.) played bugle; his brother Jay played snare drum. Jordy Larvick originally played saxophone while he was a student at Williston High School, under the direction of Virgil Syverson, who later also taught Jon Larvick to play trumpet. Shortly after graduation in 1950 Jordy Larvick joined the United States Army, serving a two-year stint at Camp Gordon, Georgia and further time in reserve status. On returning to Williston around 1954 he reunited with his old teacher, who by that time had founded the local drum and bugle corps. He has been leader of the Cowboys’ soprano horn section for several generations of corps members, sometimes playing solo in lean membership years. He joined the American Legion in 1955 and has been a faithful member for more than 58 years.