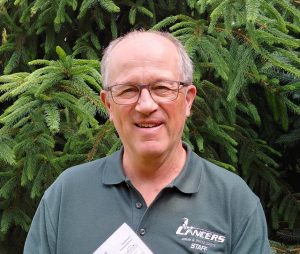 Brian Moul has touched all the bases in his service to Hanover Lancers Alumni Corps since1990: baritone player, contra bass player, horn instructor and arranger, board member. He also locates and repairs equipment, makes improvements to the rehearsal building and led the way in introducing singing to the Lancers performance repertoire. Like all Lancers instructors, he accepts no pay for his services.

His leadership as a board member has shaped the direction and improvement of the Lancers, including stimulating the growth of the Lancers indoor show, Profiles in Music, into one of the premier events for alumni corps on the east coast.

During his 32 years as a music educator, he served as band director and instrumental teacher. He is presently instrumental music instructor at the York Academy Regional Charter School. His ensembles have performed at the Pennsylvania Music Educators Association (PMEA) state convention. A graduate of West Chester University, he sings bass with the Episcopal Church of St. John the Baptist Choir and Wheatland Chorale where he serves on the board of directors. He is the chairman of the St. John’s Episcopal Church Concert Series. He is a member the National Association for Music Education, (NAME) the Pennsylvania Music Education Association (PMEA) and the Pennsylvania Drum Corps Hall of Fame.