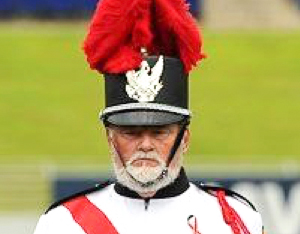 Bill Siddon had an early start in music and marching. He started playing trumpet in grade 5; played in the high school band the following year; joined the hometown Rensselaer Valiant Crusaders junior drum and bugle corps at age 11 in 1953, playing single valve soprano horn. He became a solo soprano player three years later and drum major in 1957, replacing future Hall of Fame member Alan Smythe. He joined the Interstatesmen in 1960, playing solo baritone until 1967. After a year with Syracuse Brigadiers, he found his long-time drum corps home with New York Skyliners, marching from 1969 to 1975. During his years on the field, Skyliners won the DCA championship title in 1971. He instructed several corps during the 1960s and 1970s. He was both horn and drill instructor for Averil Park Cavaliers from 1963 to 1965. He was horn instructor for Berkshire Pom Poms all-girl drum and bugle corps and Pittsfield Skyhawks and drill instructor for Capital District Defenders in 1977 and 1979. After taking time off to raise his family and teach corps in the Albany, New York and Pittsfield, Massachusetts area he joined the newly formed Skyliners Alumni Drum Corps in 1993, playing baritone for 15 years, becoming assistant drum major for two years then drum major in 2011. He retired from drum corps activity in 2017 at age 74.