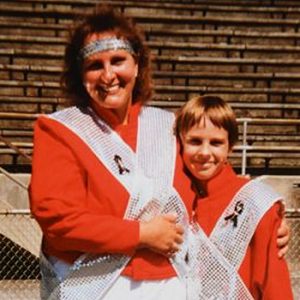 Cecily Siegfried has served in every capacity, from playing member to truck driver and corps vice president, during her three decades of activity. She has spent many hours sewing flags and uniforms, often by hand. She was one of the first female members of the Reading Buccaneers, marching in the color guard and percussion line from 1976 to 1981, and in the honor guard and percussion line from 1983 to 1990. She first marched with the St. Emmaus Sentinels color guard from 1970 to 1976. She also marched in various positions with Lehigh Valley Chieftains and Westshoremen in the 1990s. She participated in the Macy’s All-Star Drum and Bugle Corps in 1991, 1992 and 1994. She taught cymbal players in a number of corps from1991 to the present time, including Chieftains, Westshoremen, New York Skyliners, Buccaneers Alumni, and Emmaus Sentinels. She has served in various board positions with Sentinels, Chieftains, Westshoremen and Buccaneers Alumni. She won two Drum Corps Associates (DCA) championships with Buccaneers in 1979 and 1980 and a third with Westshoremen in 1996. She won the first DCA Class A championship with the Chieftains in 1997 and another with the Sunrisers in 2007. She is a charter member of the Drum Corps International (DCI) East, serving as program supervisor for more than 25 years. She is also well known for here volunteer work with many drum and bugle corps.