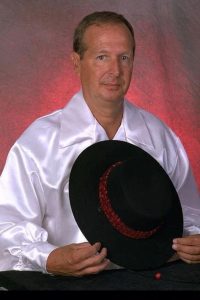 Tom Wilbur began his drum corps activity 1960, when he first played baritone horn with Dumont Police Cadets.  In the following years, he was a member of Fair Lawn Police Cadets, Blessed Sacrament Golden Knights, New York Skyliners, and Hawthorne Caballeros.   He competed in winter color guard contests with Dumont Cadets in 1963-1964 and Fair Lawn Cadets in 1965.  He played contra bass with the Golden Knights in the winter of 1965-1966 before being drafted into United States Army Intelligence.  He returned to drum corps life in 1968, playing baritone with Skyliners.  In the 20 years after joining the Cabs in 1975, he marched in the color guard, played contra bass, helped as equipment manager, then marched in the honor guard, serving as captain from 2005 to 2007.  He also marched in the honor guard as a member of the Summer Music Games All Star Drum and Bugle Corps in the Macy’s Thanksgiving Day parade in New York City.  He played contra bass as a charter member of the Hawthorne alumni corps from 1994 to 2007, serving as color guard instructor and drill technician.  He also played contra bass with St. Lucy’s Alumni Corps in 1996.  He is a member of the New Jersey Drum Corps Hall of Fame.  He is a member of Hawthorne Caballeros Alumni Chorus. He has been president of the Hawthorne Alumni Association since 2000, after serving as vice president for five years.  He has served on the executive committee of the alumni corps, the advisory and fund raising committees of the competing corps, has been Hawthorne’s Grand Prix contest program book chairman.  He is also vice commander of Hawthorne American Legion Post 199.