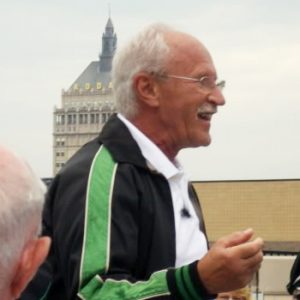 Scotty Wild has been involved in drum and bugle corps activity for more than 50 years, beginning in 1954 when he marched with Chicago Cavaliers.  He has been corps director of three different top-notch midwestern corps: the Des Plaines Vanguard, the Guardsmen and Minnesota Brass.  He has been the visual instructor of many corps, including Cavaliers, Vanguard, Hutchinson Sky Ryders, Blue Rock of Delaware, Guardsmen and Minnesota Brass. He has been visual instructor and consultant with Garfield Cadets, Boston Crusaders, Anaheim Kingsmen.  He has been an adjudicator with the Central States Judges Association since 1964, and Drum Corps International (DCI) since 1972.  He has won many performance and instruction awards, including the Minnesota Brass Brassy Award, considered as the Brass Hall of Fame and lifetime achievement award.