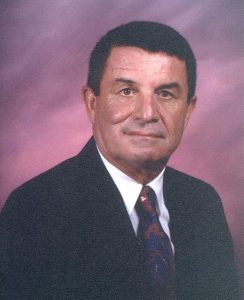 ‘Johnny Reb’ Wilson first became involved in drum and bugle corps activity while he was a senior in high school, performing with the Pontiac Chieftains, of Lawrence, MA. He played with the United States Navy Drum and Bugle Corps, at Great Lakes, IL, then went on to perform with the Jacksonville, FL Buccaneers, Lt. Norman Prince Princemen, Baltimore Yankee Rebels and Florida Brass of Tampa Bay. He has played lead first mellophone with Florida Brass for more than 10 years. In addition to performing, he has been business manager of the Yankee Rebels, editor of the Yankee Rebels monthly newsletter, columnist for Drum Corps World and Drum Corps News. He was an organizer and charter member of the International Corps Associates (ICA) Drum Corps Circuit, eventually serving as president and treasurer. He has been a horn judge for service academy drum and bugle corps competitions, and a judge for the National Twirling Judges Bureau. He is currently director and business manager of Florida Brass. He was inducted into the Maryland Hall of Fame by Hall of Fame members Dick Filkins and George Bull in 2010.