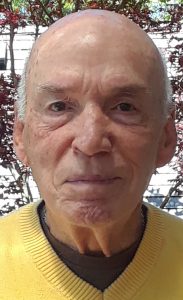 Roy Wilson played soprano and French horn with Trafalgar Township Police Boys Band (later named the Patrolmen) in Oakville, Ontario from 1957 to 1959, before playing in the horn line of Preston Scout House in 1959 and ‘60.  He was one of the co-founders of Hamilton Conqueror in 1960, and played soprano, wrote and taught drill until 1965.  He played French horn with Guelph Royalaires from 1964 to 1966.  He served as publicity director of the Burlington Teen Tour Band, Canada’s largest and best-known youth marching band, from 1982 until 1998.  During that time, he was one of the organizers of Burlington’s Sound of Music Festival drum and bugle corps contest.  He has been associated with Rochester’s Empire Statesmen, helping with various publicity projects, since 1990.  He was appointed publicity chair of the World Drum Corps Hall of Fame by founding president Vince Bruni in 2002. A proposal to make him a regular member, presented at the 2007 annual general meeting by outgoing Hall off Fame president George Bull, was approved unanimously.  He has been a member of Preston Scout House alumni band since it’s first performance in 1999.  He has served on the board of directors and a number of committees with Scout House, including steering, recruiting, publicity, city hall liaison and Website design and maintenance.