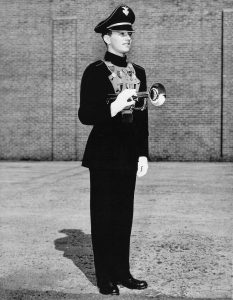 Joe Alletag was active in a wide range of positions in the drum and bugle corps community, including soprano horn player, music instructor, assistant director, corps president and judge over a span of more than three decades. After marching with a junior corps, he played soprano horn with Reilly Raiders for 10 years. He served as assistant music director for Liberty Bell Cadets for two years and East German Cadets for three years. For 10 years, he was music instructor for Rising Sun Cadets. He also served as music instructor for Lamplighters for four years and Bellaires for six years. His responsibilities as an administrator included serving as assistant director of Rising Sun Cadets for four years and as corps president of Reilly Raiders for five years. After winding up his activities as a performer and instructor, he judged the visual music caption with the Eastern States Judging Association for five years and the Mid Atlantic Judging Association for 30 years. He has also served as chief judge of the Cavalcade of Bands Circuit.