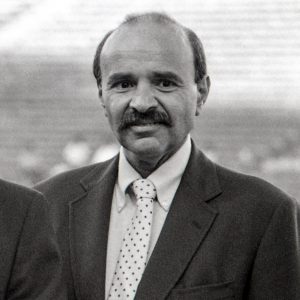 Don Angelica’s visions of musical and visual excellence helped push drum and bugle corps activity to new levels of achievement. While serving as the Chief Judge Administrator of Drum Corps International (DCI) in the 1970s, he was able to influence the scoring system to encourage instructors and designers to explore new musical themes and new visual design patterns for field shows. He proposed that drum and bugle corps participants view their activity as part of a much larger scale of activity, which includes all types of music making. He was well known to music leaders outside the drum corps movement, once taking some of his students to Lincoln Center to observe a rehearsal of the New York Philharmonic Orchestra conducted by his friend Leonard Bernstein. He was known as one of the top music adjudicators on the continent. In addition to serving as DCI’s judges administrator from 1975 to 1984, he also served as brass caption co-ordinator. He was the music arranger and instructor for many nationally known corps, including Hawthorne Caballeros, Casper Troopers and Holy Name Cadets, later known as Garfield Cadets. He was considered one of the best soprano soloists of his time, performing with Hawthorne. He was a music student of Hall of Fame member Dr. Bernard Baggs. His drum corps activities began when he joined Holy Name Cadets in Garfield, New Jersey in 1954. After leaving the Cadets in 1958, he was solo soprano with the Caballeros from 1959 to 1966. He was one of the charter members of the DCI Hall of Fame, inducted in 1985. He was also a charter member of the class of 1984 Garfield Cadets.