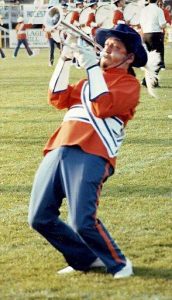 John Arietano has been taking part in drum corps activities continuously since he began performing in the brass line of St. Helena Cadets in 1958. He has been the brass instructor and arranger for several junior and senior corps over the years, beginning with the Brooklyn, NY Riversiders junior corps in 1967 and extending to the Westshoremen in the mid 1990s. Other well-known corps he taught during that interval include Sacred Heart Crusaders, Belleville Black Knights, Long Island Sunrisers, Hawthorne Caballeros, and Connecticut Hurricanes. Sunrisers won the DCA title four times while he was brass instructor: in 1977, 1978, 1982 and 1983. He taught Caballeros when that group won two consecutive Drum Corps Associates (DCA) titles in 1984 and 1985. He was with Westshoremen in 1996, earning a seventh DCA title. He has also been involved with a number of high school marching bands. His formal music education includes earning an AAS Degree in Music Performance at Bronx Community College, a BA in Music at Queens College, and five years of private study in arranging, theory and technique. He has played in many jazz and Latin big bands and combos, community orchestras, wind ensembles and several mummers groups. He won DCA’s best soloist award at the championship contest in Syracuse, NY in 2000 . He was inducted into the Buglers Hall of Fame in June, 2005.