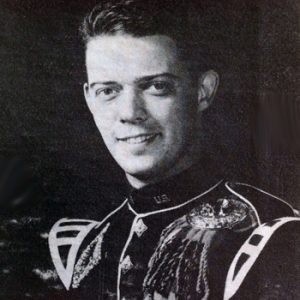 John Bosworth reinforces the word “World” in the World Drum Corps Hall of Fame. His drumming career spans two centuries and nearly 70 years. He has performed in 28 countries, from the Azores to Wales, from Austria to Australia. He has taught drum corps and drumming in countries such as Switzerland, Scotland, Oman, and, of course, the U.S.A. He played in nearly all of the U.S. states and all of the Canadian provinces, for various world leaders and kings and queens, including Queen Elizabeth of England and Nikita Khrushchev of the Soviet Union. He has performed in front of 11 U.S. Presidents, from Harry Truman to George Bush. He began drumming in 1942 at the age of three. By the time he was 12, he was traveling by bus from his hometown of Williamsport, Pennsylvania to New York City, where he took drum lessons from Gene Krupa and Cozy Cole. In 1954, he joined the Williamsport Black Eagles Sr. Drum Corps, with whom he played for four years. During his final years of playing with the Black Eagles the corps was taught by John Dowlan, who was also the percussion instructor for the United States Air Force (USAF) Drum Corps. He encouraged John to audition in Washington, D.C., which led not only to a 28 year career in Air Force musical groups, but to a lifetime of travel, performing, instructing, and arranging. He performed with the USAF Drum Corps from 1958 until the Corps’ demise in 1970. He was simultaneously playing with the USAF Pipe Band, which had once been a part of the AF Drum Corps and later became a separate unit. After the AF Drum Corps was disbanded, he was the percussion instructor and lead snare drummer for the USAF Pipe Band, until it was terminated in 1974. After that, he played with USAF Ceremonial Band and the USAF Band. Because of his exceptional service with various elements of USAF Band Squadron, he was awarded the prestigious Meritorious Service Medal from Colonel Arnold Gabriel. Concurrent with his AF career were many instruction and arranging opportunities, including instruction of drum corps such as the Williamsport Black Eagles, Milton Keystoners, Esquires, and the VIPs from Washington, D.C. After his discharge, he became the founder and director of the American Originals Fife and Drum Corps, which brought innovative rudimental drumming and visual effects to a different medium. Later, his career in instruction led him to Switzerland, where he taught the world renowned Top Secret Drum Corps from Basel, a job that eventually led him to the middle eastern country of Oman, where he originated, directed, and instructed the Royal Guard Drum Corps of the Sultanate of Oman for seven years.