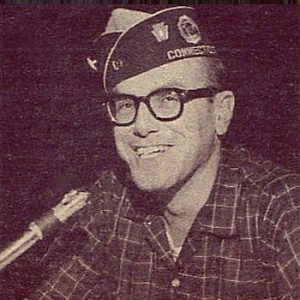 The odds are that anyone who has attended a major drum corps contest or listened to the introductions on classic Fleetwood Records contest recordings has heard the voice of Wes Hobby. He is also the narrator on the Fleetwood “Reflections” series of recordings. For more than 40 years, he served as the stadium announcer at major junior and senior contests across New England and beyond. He graduated in 1948 after two years of study at Boston’s School of Radio, Television and Theatre and worked as a staff member and sports announcer at a number of radio stations in New England. During his morning radio show on station WADS in Ansonia, Connecticut he began playing a drum corps selection on the air each day. There were no drum corps recordings available to the public yet: his selections were tapes borrowed from Frank Ogle of the Connecticut Hurricanes. The Hurricanes invited him to announce their contest in 1958, the first of a steady stream of engagements over the next four decades. He has been the announcer for such notable events as Drum Corps Associates (DCA) championships, the Barnum Festival, the World Open championships, Mission Drums, the U.S. Open championships, Blue Grass Nationals, Parade of Champions, the Grand Prix contest, An Evening With The Corps in Carnegie Hall, the Connecticut American Legion state championships, the SuperBowl of Music and Drum Corps International (DCI) East championships. His voice has been heard by audiences in such well known venues as Madison Square Garden, Carnegie Hall, Meadowlands Stadium, Newark Symphony Hall, University of Kentucky and many other local stadiums and concert locations. Many drum and bugle corps fans refer to him as “the voice of drum corps.”