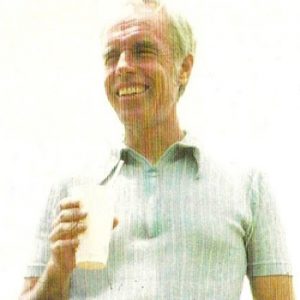 At age 15, Jim Jones was managing the Sons of the American Legion drum corps in Casper, Wyoming. After serving in the Army Air Force during World War II, he returned to Casper, and in 1957 borrowed $4,000 to establish the Troopers drum and bugle corps, the only competing corps in the entire state. He was a successful contractor, but devoted his time and energy to the Troopers, even designing the corps’ distinctive heritage uniforms. The Troopers represented the romantic era of the Old West by performing in uniforms consisting of a hat with crossed sabers, dark blue jackets with brass buttons and yellow kerchiefs, which are replicas of the garments worn by the Eleventh Ohio Cavalry in 1865, when Lt. Caspar Collins died in an Indian battle near present-day Casper, Wyoming. He revolutionized drum corps activity by taking the Troopers on the road to perform at competitions across the country, setting a precedent for touring drum corps that followed the Troopers’ example in the 1960s and 1970s. In its 33-year history, the Troopers have won 11 international championships and have consistently been among the top 20 drum corps in the world. He was also one of the founders of Drum Corps International (DCI), along with David Kampschroer of the Blue Stars, Gail Royer of Santa Clara Vanguard, Don Warren of Chicago Cavaliers and Bill Howard of the Madison Scouts, who created the Midwest Combine in 1971, which became the foundation for DCI. He was inducted into the DCI Hall of Fame as a charter member in 1985. In his honor DCI, established the Jim Jones Leadership Award, given each year to one drum major selected by a committee of DCI Hall of Fame members. He passed away in 1994.