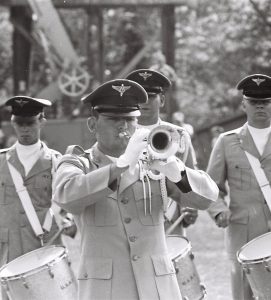 Tommy Martin first played a horn with St. Brigid’s Fife, Drum and Bugle Corps, sponsored by the fire department in Ridgewood, Queens, in 1945. He became a member of Consolidated Edison Lamplighters for the 1951 season, then marched with St. Joseph’s Ironbound Cadets, of Newark, NJ through 1955. The New York Skyliners became his drum corps home in 1956. He is best remembered as an exciting soprano soloist with a super-articulated approach that became well-known throughout the drum corps world. His solos also helped create a unique identity for the United States Air Force Blue Eagles drum and bugle corps when he served from 1959 through 1963. He has also been affiliated with such well-known East Coast corps as St. Rita’s Brassmen, Ignatius All-Girls Drum and Bugle Corps, New Image and New Image II. He has also served as brass instructor for the exhibition and parade corps sponsored by the Desiderata and Nassau County police departments. He was inducted into the Buglers Hall of Fame on June 25, 2005 at the Champions on Parade in Bridgeport, CT.