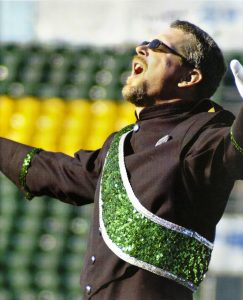 John Mayer has dedicated more than a quarter of a century to insuring that the Govenaires, the oldest competing drum and bugle corps in North America, continues to flourish. The corps originated in 1927 as the St. Peter Legion Corps and had several name changes before becoming the Govenaires in the 1960s, named in honor of the five state governors who came from the town. Since playing in the Govenaires drum line from 1980 until 1986, he has taught every caption except brass, won several best drum major awards at Drum Corps Associates (DCA) championship tournaments, and led the corps to championships in 2006 and 2008 in the DCA Class A category for small corps. He began arranging for and teaching the Govenaires drum line in 1985. Since then, he has served as both program and visual designer for almost 20 years. He has also been the corps director since 2002. His record of continual service with the Govenaires was interrupted only when he played tenor drum with Madison Scouts in 1987 and ’88.