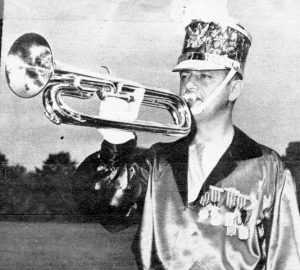 Bill Mullen joined the Arthur McArthur Veterans of Foreign Wars (VFW) Post parade corps in 1929. He played bugle with the group of about 30 members until 1934, when he joined Howard C. McCall American Legion (AL) Post 20 junior corps. In 1937, he moved to the Musketeers to play soprano bugle in the group sponsored by Archer-Epler Post 979 in Upper Darby, PA. The corps lost several members who served in World War II, but he and many other former members returned to the re-organized senior corps in 1947. As a baritone bugler, he won national VFW titles in Boston, Milwaukee, New York and Miami. He served as business manager of the Musketeers for many years, representing the corps at contest meetings. He organized the Philadelphia Senior Circuit, which included the Jersey Joes, of Riverside, NJ. This organization was one of the first regional circuits and served as a model for later organizations, including Drum Corps Associates (DCA). He instructed a number of area junior corps and such senior corps as Imhof, York White Roses and Baltimore Yankee Rebels. He organized the Mid-Atlantic Judges Association, and adjudicated in several caption areas for more than 25 years.