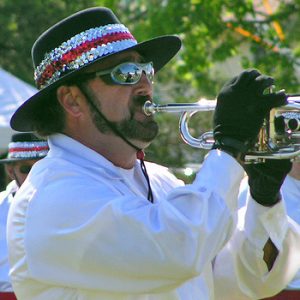 Duke Terreri has been involved with drum and bugle corps activity since 1956 when he was a horn player with St. Lucy’s Cadets. He has been a major contributor to the alumni drum and bugle corps movement for more than two decades, providing services as music instructor, assistant instructor, arranger or performer with such high profile alumni organizations as Archer Epler Musketeers, Hawthorne Caballeros, New York Skyliners, Reilly Raiders, St. Lucy’s, Blessed Sacrament Golden Knights, Morristown Colonials, Lambertville Volunteers. He served as director of St. Lucy’s senior corps for three years and has arranged and taught the brass section of such corps as New York Skyliners, Hawthorne Caballeros and St. Lucy’s. He is highly proficient at teaching the techniques and styles required to get the most out of his ensembles. He is the current conductor and music director of the Audubon Bon Bons All Girl Drum and Bugle Corps alumni chorus. He has played horn with Archer Epler Musketeers, New York Skyliners and Hawthorne Caballeros and arranged for and instructed a number of junior, senior and alumni corps since 1973. He has also been director of St. Lucy’s senior corps and co-director of St. Lucy’s Alumni corps. He has judged music and brass captions for Drum Corps Associates (DCA), Metro Adjudicators Association and Eastern Marching Bands Association. He served in the United States Army from 1970 – 72 with the 33rd Army Band Special Troops Group in Heidelberg, Germany and was bandmaster from 1995 to 1997 while serving as a captain in the Pennsylvania State Army Reserve Band. He was recently elected to the New Jersey Drum Corps Hall of Fame and the Pennsylvania Drum Corps Hall of Fame.