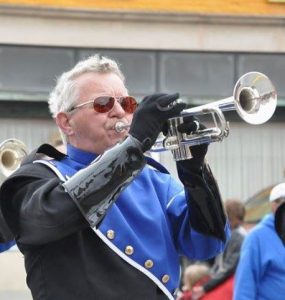 Geoff Adeney was a member of Preston Scout House from 1964 to 1967, the final year of operation of the band. He then performed in the brass line of Guelph Royalaires for the next 20 years, except for a two-year interval when he was a brass player and instructor with Niagara Regionnaires. He served on the board of directors of both organizations. He joined the Empire Statesmen in 1990, playing contra bass, baritone and solo soprano in the horn line over the next 15 years. He also served as a brass instructor of St. Andrew’s junior drum and bugle corps in Cambridge from 1975 to 1980. His other positions with the corps included equipment manager and bus driver. He returned to Preston Scout House to march with the alumni band in 2013.