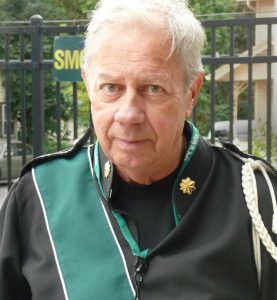 Bob Bond has been involved in drum and bugle corps activity for more than half a century, beginning as a bugler in the Westhill Lions Club drum corps in Toronto. He was a member of such top Canadian corps as Preston Scout House, Toronto Optimists, Jolly Jesters and Canadian Commanders. He also played soprano horn with New York Skyliners for three years before serving as business manager and drill manager of the Peterborough Crescendos. He was also the drill writer and drum major of Kawartha Kavaliers in the Peterborough area. Moving back to New York state in 1979, he became director of the Greece Shoreliners in the Rochester area, and director of the Greece Cadets. He was a member of the administrative staff when the Empire Statesmen were founded by Vince Bruni in 1983. He also served on the administrative staff again from 1999 to 2004. He has also marched as drum major of Mighty St. Joe’s alumni corps during two separate periods. From 1981 to ‘89, he was a marching and manoeuvring judge and consultant.