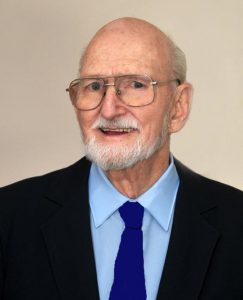 Jack Doster joined the Hamilton American Legion (AL) Post #20 Junior Drum and Bugle Corps in late 1946. He was placed in the color guard while he learned to play the bass drum. In the fall of 1947, he was asked to move up and become a regular bass drummer since the regular bass drummer could not make practices. From 1948 through 1951 he marched in the junior corps and then left to be a permanent member of the Hamilton AL Post #20 Senior Drum Corps as a member of the color guard. In 1964, he was forced to take a leave of absence because of his demanding work schedule. However, during the next 24 years he worked behind the scenes with director George Bull, spending many hours editing and printing the program book for that famous and outstanding senior drum corps show, the March of Champions. In addition, he also worked on various other very important projects for the corps. In 1988, Jack received a phone call that made him very happy. He was asked to return to march in the color guard with the newly formed Yankee Rebels Alumni Corps. Happy drum corps days were here again. He, like many other alumni members, returned and put together one huge corps. He was now back with his many friends, playing and marching like he had never stopped. He continued to march in the Alumni Corps for the next 22 years. The Dixie Stinger Show is considered one of the best indoor concerts in the drum corps world as was the March of Champions. Needless to say, he is very proud of his contribution to these projects and the corps was extremely grateful for his endless efforts. He has spent many hours behind the scenes putting together outstanding program books for the March of Champions and Dixie Stinger along with other various endeavors for the corps. These publications have been a great credit to him while helping him fulfill his wonderful hobby of drum corps.