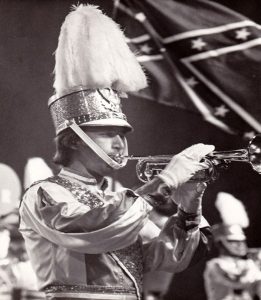 Ricci Gentile’s life revolved around drum and bugle corps. In 1959, at age 8, he began playing soprano bugle with St. James ‘B’ Corps, advancing rapidly to perform with St. James ‘A’ Corps until 1967. In 1968, he joined the Baltimore Yankee Rebels. A few years later, in 1971, he was accepted into The Commandant’s Own United States Marine Drum and Bugle Corps. In all of these corps, he was soloist soprano, with most of the music revolving around him. He was widely considered to be one of the finest soloists ever to come out of the state of Maryland. He served three years with the Marine Drum and Bugle Corps, being discharged after he was diagnosed with diabetes. He then returned to the Yankee Rebels competitive corps. He joined the Yankee Rebels Alumni Drum and Bugle Corps in 1988 and was the soprano soloist until his passing in 1994.