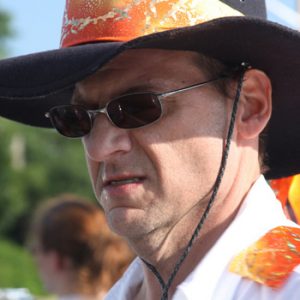 Gary Karpinski has served several east coast drum and bugle corps both on and off the field since 1976. He played in the drum sections of Saints and Blessed Sacrament parade corps and was a member of the Bayonne Bridgemen percussion section when it was judged the best drum line in the Drum Corps International (DCI) finals in 1981 and ‘82. He was a snare drummer with New York Skyliners from 1985 to 1992 and an award-winning pit performer in 1993. He was Skyliners head drum major in 2000 and 2001. He has been on the drum staff and served on the administrative staff of both the Bridgemen and Skyliners. With Skyliners, he has assisted with fund raising, served as personnel director. He has been a percussion judge with the NJA judging community.