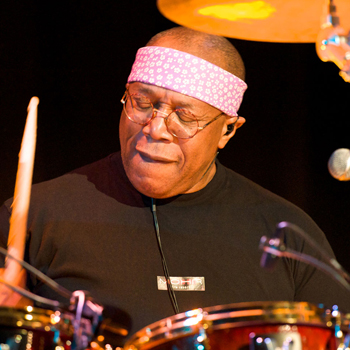 Billy Cobham is the 2017 World Drum Corps Hall of Fame Distinguished Professional Achievement inductee, a pioneer in jazz fusion music blending elements of jazz, rock and funk. His early drumming days included marching with St. Catherine’s Queensmen of St. Albans, Queens in 1961 and 1962 and Long Island Sunrisers from 1963 to 1966. In a career spanning five decades since then he has become known around the world not only as a percussionist but composer, producer, educator and clinician, a constant musical explorer regularly expanding his personal creative expression.

When he marched with St. Catherine’s Queensmen, Cobham was a student of World Drum Corps Hall of Fame member Bobby Thompson and mentored by Orus Cavnor, whose traditional rudimental approach to drumming Cobham incorporated into the jazz, Latin, fusion and pop idioms, establishing a unique style that brought him many accolades for enriching those musical forms.

His drum corps performances can still be heard on recordings such as Fleetwood’s “Brass By Night” and “World Open.” His Gene Krupa-style solo on the latter in “Sing, Sing, Sing” with the Sunrisers is considered a classic.

During his long career he has performed and recorded with Miles Davis, the Mahavishnu Orchestra, the Brecker Brothers, George Benson, the Grateful Dead, Deodato and others.

Hall of Fame Professional Achievement Inductees are drum and bugle corps alumni who have gone on to achieve notable distinction in their professional lives, reflecting and acknowledging the values instilled by their performing experience in the activity. Billy Cobham’s formal induction will take place during the Hall of Fame’s annual banquet taking place this year in Rochester, New York on Labor Day weekend, one of several special events to be held during the Drum Corps Associates (DCA) championship tournament weekend on September 1, 2 and 3. The ceremony includes the induction of six new regular and nine new associate members.

Billy Cobham was born in Panama on May 16, 1944. His family relocated to New York City in 1947, living first in Harlem and then in the Bedford-Stuyvesant section of Brooklyn. His first paid performance was at age 8, courtesy of his pianist father. He attended New York’s famous High School of Music and Art, where he studied music theory and drum technique.

While on a European tour with Horace Silver’s Band in 1968 he became one of the first percussionists to use the electronic drum controller made by the Meazzi Drum Company in Milan. In 1969 Cobham branched out into jazz fusion when he co-founded the fusion group Dreams. A year later he was invited to join Miles Davis’s group and contributed to four landmark recordings, including Bitches Brew and A Tribute to Jack Johnson. Cobham and others formed the Mahavishnu Orchestra in 1971, releasing three acclaimed albums before the band dissolved and he launched his solo career with Spectrum, one of the definitive albums of the jazz-rock era.

He is the central figure in Sonic Mirror, a 90-minute documentary film portrait of his life and times, focusing on how rhythm and music function as a means of communication and universal language.

During the 1970s and 1980s, he recorded steadily for Atlantic, CBS, Elektra, and GRP, collaborating with artists ranging from George Duke, John Scofield, and Tony Williams to Jack Bruce and the Grateful Dead, both on stage and in the studio.

In 1992, the United National International Children’s Emergency Fund (UNICEF) engaged Cobham in a musical project to work with autistic outpatients and street children in Santos, near Sao Paulo, Brazil. In 1993 he performed, recorded, and produced at the World of Music, Arts and Dance (WOMAD) the start of an association with WOMAD that still continues. He has conducted sessions in performance techniques at the University of Bath Spa in England, and is an official patron of WOMAD in Bath.

Other activities in the 1990s included touring and recording with Jazz Is Dead, Paradox, Nordic, the London Jazz Orchestra and development of the Conundrum book series, which allows participants to play along on their specific instruments: drum set, piano, brass, woodwinds, bass, and guitar.

In early 2014, he released Tales from the Skeleton Coast, the third instalment of four recordings produced as a commemoration and celebration of his mother and father, both of whom were musicians.

More recently, he has continued to develop his Extended Works series, a musical exploration in collaboration with local jazz orchestras around the world bringing his critically acclaimed, widely appreciated material to the orchestral jazz stage, sharing his vast musical history with diverse audiences globally.