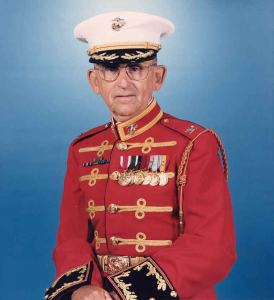 United States Marine Colonel Truman Crawford was one of the best-known arrangers in the drum corps community. Throughout the 1960s and ‘70s, every championship corps in the United States and Canada played his arrangements, which often featured swing versions of traditional show, pop, and military tunes. After graduating from high school in 1953, he was accepted into the U.S. Air Force Drum and Bugle Corps as a baritone bugler. The unit disbanded in 1963, so he moved to Chicago to run a music store and arrange music. In 1967, he was invited by the U.S. Marines to become chief music arranger. He was the arranger, instructor and drum major for Yankee Rebels when that senior corps won the American Legion national title twice in the early 1970s. He was commander of the Marine Corps Drum and Bugle Corps from 1973 to 1998. He was a strong influence in convincing manufacturers to produce bugles with two valves instead of one, thereby opening a larger musical scale. He was the oldest Marine on active duty when he retired in 1998.