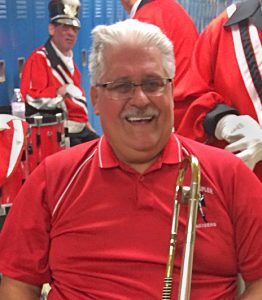 Bob Gaff, of Mount Laurel, New Jersey is the 2007 winner of the World Drum Corps Hall of Fame President’s Lifetime Achievement Award; his fourth such honor by prominent drum corps organizations. Gaff, who was among the first Hall of Fame associate members inducted when that category was introduced in 2001, was selected for the lifetime achievement honor this year by president George Bull, of Baltimore, Maryland. He will be inducted as a regular member in September. Gaff was inducted into the Buglers’ Hall of Fame in Bridgeport, Connecticut in July 2005; 50 years after his first involvement in drum corps. In September 2005 he was inducted into the Pennsylvania Drum Corps Hall of Fame. He was elected to the Massachusetts Drum Corps Hall of Fame in 2001. His drum corps career began when he spent seven years with St. Rose of Chelsea, Maryland, beginning in 1955. In 1963 and 1964, he played with St. Kevin’s Emerald Knights in Boston, and was a member of the undefeated national champion brass quartet in both years. In the later years of the 1960s, he marched with Blessed Sacrament Golden Knights, the United States Air Force Academy Drum & Bugle Corps, and the Reilly Raiders. He was a member of the Yankee Rebels, of Baltimore, from 1969 to 1974, winning three American Legion national championships: in 1969, 1970 and 1971. In 1994, he marched with the Bushwackers, of Harrison, NJ. He has marched with several alumni corps, including Yankee Rebels, Archer-Epler Musketeers, Reilly Raiders, St. Lucy’s Cadets, Blessed Sacrament Golden Knights, New York Skyliners and the Princemen. He was named a lifetime member of the Reilly Raiders in 2000.