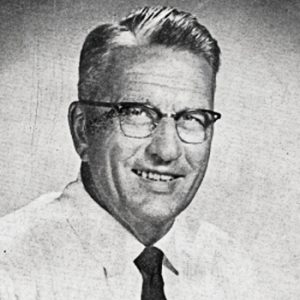 When you imagine who the quintessential great Director of the pre-DCI era might be, you need look no further than Bill Kemmerer, Sr., the Cadets’ second longest serving Director. “The Chief,” as he was known to his Cadets, was a giant of a man in stature, in execution of his responsibilities, and in his vision.
During the Second World War, with our older Cadets serving in the military, the younger Cadets remained active as a parade corps. Since gas was rationed the corps was transported to appearances on Garfield Fire Trucks. The driver of one of those trucks was Bill Kemmerer, Sr. It was the beginning of a labor of love for The Chief that covered a time span of 23 years, 14 of them as Director.
In 1950, following the death of his predecessor, Joe Huber, The Chief moved up from his position as Assistant Business Manager to become the Cadet’s fifth Director (titles were a bit different during those years). He planned and executed the corps’ first transcontinental tour to Los Angeles to successfully defend the Cadets American Legion National Title and retire the Championship Silver Drum for the Cadets’ first 3-peat.
It was The Chief’s trademark to travel the route of the corps’ planned travel itinerary for the upcoming season during the preceding winter to find accommodations, rehearsal sites, restaurants, rest stops, and points of interest he thought the Cadets should see or events they should experience. With Bill Kemmerer it was first class for the Cadets. He would accept nothing less. More than any other person, The Chief was responsible for the Cadet experience becoming a life-changing experience.
The Cadets have been very fortunate to have several Directors that left a deep and lasting impression on the Cadets. Bill Kemmerer is one of those great men. To this day he is remembered in a thousand different ways, and when his name is brought up in conversations it is with reverence and respect.