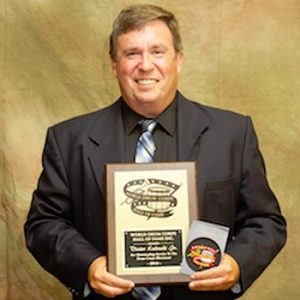 Vic Kulinski Jr. already had an impressive record of achievement as a judge, administrator and percussion instructor by the time he played a significant role in helping Drum Corps Associates (DCA) expand into the southeastern sunshine states. After co-founding Heat Wave of Orlando, Florida in 1992, he served as executive director and board member until 2005 while also responsible for percussion visual instruction, playing snare drum in the line and then marching out front as drum major. He was the co-founder and initial coordinator of DCA South in 2003. He served on the board of the Corps Vets of Atlanta, Georgia from 2006 to 2010. Before his southern involvement, he served as executive director of the Connecticut Hurricanes from 1985 to 1989 and was instrumental in the restart of the Hurricanes in 1986. He founded Class ACTE winter guard in 1980 and served as director until 1985. He also founded two winter percussion ensembles: the Spitfire ensemble and the Riptide ensemble. He has been a percussion judge since 1977, with the North East Circuit, Florida Band Masters and Field Marching Band Conference. He taught the Hurricanes’ percussion section from 1976 to 1989 while also teaching Connecticut Vagabonds from 1981 to 1983. He handled the percussion visual caption for Corps Vets from 2006 to 2010 and began teaching the percussion section of the Sun Devils of Inverness, Florida in 2013. He also handled percussion duties with several junior corps from 1975 to 1992, including Explorers of Oxford, Connecticut, Connecticut Classics and Magic of Orlando. He first played snare drum with Carey’s Cadets Fife and Drum Corps in 1967, subsequently playing with Connecticut Royal Lancers, Prospect Fife, Drum and Bugle Corps, Oxford Explorers and St. Andrew’s Bridgemen. He has performed or marched as drum major with several corps, including Hurricanes, Bahia Shriners Drum Corps, Heat Wave, Bridgemen Alumni and Atlanta Corps Vets. He was named a charter member of the Hurricanes Hall of Fame in 1994. He has won many individual snare drumming awards since 1970, including the New England Individual and Hurricanes National Invitational titles, finished second in the Bridgemen National Open, finished in the top five in DCA snare competitions 10 times since 1998 and won the DCA Class A best drum major award six times since 1997.