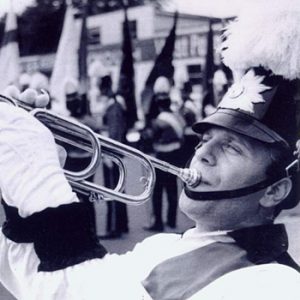 In the nine years after winning his first competition as an individual soprano player, Riggie Laus won every local, state and national individual contest he entered, retiring undefeated in 1965. He was the first bugler to play Flight of the Bumble Bee and the only one to play it on a G-D, one valve slide bugle. He was inducted into the Buglers Hall of Fame in 2005. Riggie Laus graduated from Penn Hills High School in 1943, where he studied trumpet for five years. While serving with the United States Navy’s Fifth Amphibious Forces fleet in the Pacific from 1944 to ‘46, he fulfilled extra duties as the ship’s bugler. Returning home, he marched with several community bands before beginning a quarter of a century commitment to the Pittsburgh Rockets in 1948. He immediately began experimenting with the single valve bugle, using fine emery cloth to loosen the tuning slide for free movement to lower the pitch a full step. When slide bugles were introduced, he used the full length to obtain the notes F and A in the lower register and lip control for proper pitch and effect. For fast passages in the upper register, he combined alternate fingering and agile lip muscle movement to produce proper tone and effect. He composed a number of exercises designed to develop fast slide action, improve internal skills, develop slurring and regular, double and triple tonguing techniques. Between 1958 and 1982, he instructed many Pennsylvania drum and bugle corps, including Tarentum Red Knights, who were three times VFW state parade champions; Meadville Thunderbirds; Quasars; Sharpsburg Cadets; General Butler Vagabonds; Pittsburgh Rockets Juniors and Steel City Ambassadors.