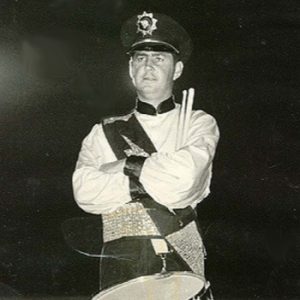 Ray’s performance history began in 1956 with the Connecticut Yankees Sr. Drum & Bugle Corps, Stratford, CT. He marched as a snare drummer with the Yankees until 1963. At the end of 1963 he brought his talents to the Connecticut Hurricanes where he was percussion arranger, performance caption head and snare line member (until the early 1970’s). Ray provided percussion design and performance instruction for the the Connecticut Royal Lancers, St. Raphael’s Buccaneers, and New Bedford Whalers Sr. Corps, and many others. Ray was a member of the Northeast Judging Association in the Percussion execution and general effect captions. He was involved in numerous percussion clinics for drum corps, bands and judging associations. He was the Connecticut State Individual Snare Drum champion for six consecutive years. As both a performing snare drummer and instructor/arranger for the Hurricanes, the corps won every major DCA and pre-DCA title including the Senior World Open, the American Legion Nationals, the Dream Championship, and the DCA World Championships (twice under Ray’s tenure with the corps).