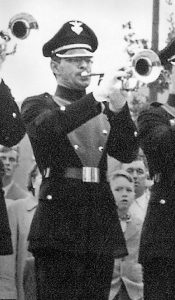 In his year of induction, Bill Mitten had been involved in drum and bugle corps activity for 55 years. From 1929 to 1942, he was a member of the Osmond Post Cadets. During the following three years, he was a member of the Army Air Force Drum and Bugle Corps. He was an original member of Reilly Raiders in 1946 and performed with corps until 1958. He was a horn player, but also marched as drum major when required. He was one of the first drill instructors to include dance steps, gimmicks, body movements and choreography in field contest routines. He served as an instructor with a number of corps, including Osmond, Soby-American Legion and Norristown O’Hara Todd. For 35 years, he was a judge with Eastern States, Mid-Atlantic, Drum Corps Associates and the Cavalcade of Bands judging Associations.