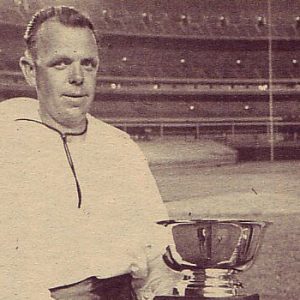 During the late 1950s and 1960s, Ralph Silverbrand was probably the best-known drum corps personality in North America. He was the Hawthorne Caballeros drum major from 1956 through 1967. During those 12 years, the Cabs won nine American Legion (AL) national championships. Between 1953 and 1966, the corps won eleven national titles, He was the only member of the corps on the field for all 11 victories. He played baritone horn when he first joined the Caballeros, and almost quit the corps in 1956 when corps director Jim Costello asked him to become drum major, because he didn’t think he qualified for the position. He founded the Hawthorne Muchachos in 1959, to extend the benefits and enjoyment of drum corps activity to young people in Hawthorne and surrounding communities, and to create a ready pool of talent once members became too old for junior corps activities. The Muchachos wore the same basic uniform as the senior corps except for minor trim differences, and shared the instruction staff and rehearsal facilities with the Caballeros. Ralph and his wife Dot retired to live in the Adirondack region of upstate New York.