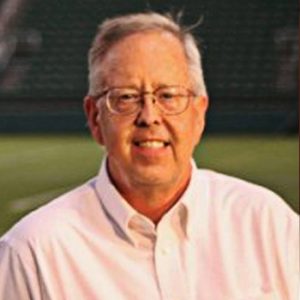 In 1961, Steve Vickers was a cymbal player with the Jets, the feeder corps for the Sky Ryders. He became the Jet’s corps director while still a junior in high school. After performing with Sky Ryders from 1967 through 1970, he graduated from the University of Kansas in 1971 with a Bachelor of Science degree in Journalism. He used his advertising and journalism skills to perform public relations and administrative duties with Sky Ryders, Blue Knights, Madison Scouts and Capitol Aires. From 1985 until 1992, he was chairman of the DCI championships planning group. He is perhaps best known as the publisher of Drum Corps World (DCW), the publication which has become the activity’s key source of information for all types of pageantry units. He first worked as an editor at DCW in 1973, then purchased the newspaper the following year from founders Don Whiteley and Jim Jones. He served on the Madison Scouts board of directors for 15 years, and handled the travel arrangements for the Scout’s 16-day tour of Germany, the Netherlands and the United Kingdom in 1988. He published A History of Drum and Bugle Corps, a 432-page hardcover book about the activity in 2002. A second volume was published a few years later.