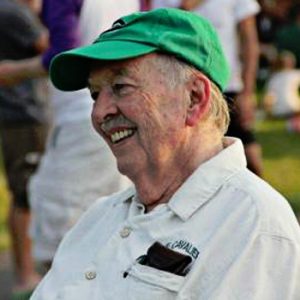 Don Warren created the drum and bugle corps that became the Chicago Cavaliers, and worked on corps activities continually for 56 years, without ever serving as full time corps director or even learning how to read music. The corps he created was renamed the Cavaliers in 1951, when the members began wearing green, black and white uniforms. The corps originated as an activity for his Boy Scout troop, after he watched the Racine Scouts perform at Chicago’s Soldier Field stadium in 1946. Under his leadership, the Cavaliers won its first Veterans of Foreign Wars (VFW) national championship title in Miami in 1957, performing in a steady rainstorm. In 1961, the Cavaliers went undefeated during the contest season and repeated the feat in 2002. Throughout the 1960s, the Cavaliers were so successful the corps was chosen as the Junior Corps of the Decade by the World Drum Corps Hall of Fame. He initiated the discussions with Jim Jones, of Casper Troopers), Bill Howard of Madison Scouts, Dave Kampschroer of Blue Stars and Gail Royer of Santa Clara Vanguard that resulted in the founding of Drum Corps International (DCI) in the winter of 1970-71 DCI was designed to give competing junior corps more control over rules, judges and drum corps activities than was previously permitted by the VFW and American Legion (AL) organizations that had governed national and state drum and bugle corps competitions until that time. He designated day-to-day management of the Cavaliers to a corps manager in 1975, but remained active as president and chairman of the board.