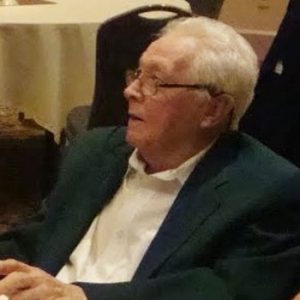 ‘Windy’ Wildemore participated in drum and bugle corps activity for more than 60 years, starting with a Boy Scout group in 1933, and performing as a horn player, drummer, administrator and judge at various times. He played soprano horn for the Community League junior corps for 10 years. He served in the United States Navy from 1942 to 1944 during World War II. In 1946, he helped organize the Imhof Thunderbirds senior corps in Pennsylvania. The Thunderbirds won the American Legion state championship for several years. Beginning in 1950, he performed in the percussion section of the Reilly Raiders and was business manager of the corps for more than 10 years. Reilly Raiders were selected as the corps of the decade by the World Drum Corps Hall of Fame during these years. He organized and served as chief judge of the National Judges Association (NJA) for three decades and was chief judge of Drum Corps Associates (DCA) for four years. Over a number of years, he helped form several drum and bugle corps, marching band and color guard contest circuits and championship contests, including the Eastern States Circuit, which had 30 member corps and the NJA Indoor Guard Association, with more than 100 member color guards.