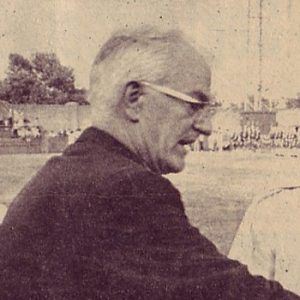 Monsignor Edward F. Wojtycha celebrated his 92nd birthday in late autumn, 2005 by attending a reunion of more than 100 former members of St. Vincent’s Cadets, of Bayonne, New Jersey. Monsignor Wojtycha was the corps founder and “chief” of St. Vincent’s Cadets throughout more than 20 years of the corps’ existence from the 1940s to the 1960s. Monsignor Wojtycha, along with corps director Mickey Petrone, a charter member of the Hall of Fame, guided St. Vincent’s to many state and national titles, including both the American Legion (AL) and Veterans of Foreign Wars (VFW) national championships in 1951, 1952 and 1953. The Cadets were chosen the Junior Corps of the Decade for the 1950s by the World Drum Corps Hall of Fame.