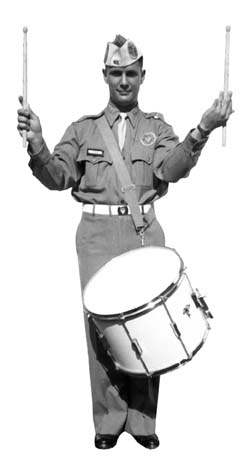 John S. “Jack” Pratt, one of the most prolific percussion writers in the drum and bugle corps community, passed away early Monday, April 6 2020 from advanced stages of Alzheimer’s disease. He had also undergone triple-bypass heart surgery in December 2000.

Because of the effects of the current corona virus pandemic, family members are not certain when a memorial mass or funeral can be held. He was born on January 13, 1931 in Seneca Falls, New York.

He was inducted into the World Drum Corps Hall of Fame in 1990. He was also a member of the Percussive Arts Society (PAS) Hall of Fame and an honorary member of Canadian Associates Drumming Rudimental Excellence (CADRE).

While still in high school in the late 1940s, he marched beside Hall of Fame drum instructor Norm Peth in the Geneva Appleknockers’ big drum line including four snares, four tenors, two bass drums and two cymbals. After graduating from high school, he enlisted in the Army.

He began serving as rudimental drum instructor of field music with the U.S. Military Academy band at West Point in 1959, retiring in 1969 after a 20-year military career. He was one of the first to urge the use of large drum lines, paving the way to modern percussion sections of 30 or more members that began to appear on the contest field by the late 1960s. As an exponent of large drum lines, he urged that the level of difficulty not be reduced and that various performance factors not be sacrificed.

In the late 1950s, he submitted a large instruction book to various publishers. Belwin Inc., a New York publishing firm, asked him to divide it into three separate books, which became 14 Modern Contest Solos, Ancient Rudimental Snare and Bass Drum Solos, and 128 Rudimental Street Beats. About a year later, Belwin published another book: 26 Standard American Drum Rudiments and their variations. Over the following 50-plus years he wrote hundreds of drum solos and many other books.

He taught the Interstatesmen in the 1960s, when he introduced the rudimental bass drum to the drum corps community, as part of his unique concept of percussion voicing. “He expanded the horizon of rudimental drumming by extending rudiments over the barline and using deceptive cadences”, said Robin Engelman, a fellow PAS Hall of Fame member. “The swing and musicality of his solos changed the course of rudimental writing and performance.”

He was associated with a number of other corps, including Geneva Appleknockers, Troop 12 Indians, Kingsmen, Lakers, Criterions, Hawthorne Caballeros, King’s Regiment, Doremus Post, Crimson Kings Tri-County Cavaliers, Rochester Grey Knights, Ambassadors. During his ten years with the Caballeros, the corps won three American Legion Championships, in 1974, 1975 and 1980, and Drum Corps Associates (DCA) Championships in 1972, 1973, 1974 and 1976.

He began to judge drum and bugle corps contests in the late 1950s, serving as an adjudicator for the New York chapter of the All American Drum and Bugle Corps and Band Association and also with the New Jersey chapter of the Metropolitan All-American Association.

In addition to writing hundreds of drum solos, he was a published poet, the author of an acclaimed thesis on the poetry of John Keats and enthusiastic promoter of the art of rudimental drumming,