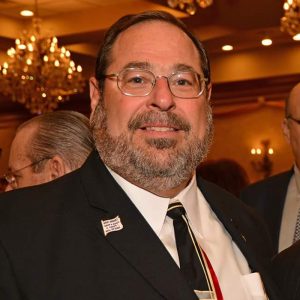 Alan Katz has established notable achievements in performing and instruction to go along with his outstanding record in administration during a drum and bugle corps career that spans almost 50 years since he first played lead baritone horn with the Monarchs of Oakland/Wayne, New Jersey in 1968.
His title with Hawthorne Caballeros since 2002 has been business manager but in effect he has been directing the corps during those years. While he has been serving as business manager the Caballeros have won the Drum Corps Associates (DCA) world championship and the American Legion national championship. He has simultaneously also served as chairman of the Cabs at the Beach and Grand Prix championship contests and held a position on the Caballeros board of trustees.

His administration responsibilities began by serving as assistant director of Kings Regiment of Wayne in 1977. He moved to the Caballeros management team in 1988, serving as fund raising chair and assistant business manager before becoming business manager. He was a visual staff member when Caballeros were three-time visual caption champions and undefeated DCA champions in 1995.

He is a recipient of the Caballeros of All Years award. He was inducted into the World Drum Corps Hall of Fame in 2002 as an associate member.