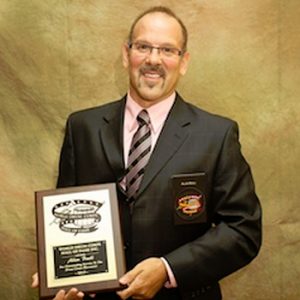 Allan Buell is a superb administrator who has also reached a high level of achievement as a color guard visual designer and instructor and a judge. He served as business manager of Rochester’s Empire Statesmen, the Drum Corps Associates (DCA) champions in 2004, from 2003 to 2011, while simultaneously heading up the organization of DCA world championship tournament weekends. Initially, he served as chair of the local organizing committee when the DCA championships returned to Rochester from Scranton, Pennsylvania. DCA appointed him as operations director in 2005. He was appointed vice president of DCA in 2011. He also worked closely with Empire Statesmen and World Drum Corps Hall of Fame founder Vince Bruni in organizing the DCA championships in Rochester in 1996. He instructed the Winter Guard International (WGI) champion Bishop Kearney High School color guard ensemble with Hall of Fame member Vince Monacelli from 1991 through 1998, winning the WGI title an unprecedented five years in row from 1993 to 1997. He served as president of the North East Color Guard Circuit from 2001 to 2009. He was inducted into the Circuit’s Hall of Fame in 2009. He has also served as guard visual designer and instructor with Empire Statesmen and Rochester Crusaders. He has judged with several associations since 1999, including the New York Federation of Contest Judges and Pennsylvania Federation of Contest Judges. Between 1988 and 2003, he marched in the color guard of Empire Statesmen, Les Metropolitans, Syracuse Brigadiers and Rochester Crusaders, also serving as Crusaders business manager in 2002 and 2003.