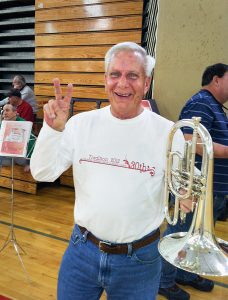 Gus Boova is widely regarded as a natural leader who performed and taught at championship levels with several organizations. In 1979 and 1980, he played flugel horn with Reading Buccaneers when they won Drum Corps Associates (DCA) world championships, including a perfect brass score. He was a member of the visual staff when Westshoremen won the DCA title in 1996. He was director of Southwind in 1977, a short-lived corps that included many former Yankee Rebels players and some instructors after that group disbanded in 1976. He has been mellophone section leader with Hawthorne Caballeros Alumni since 2003. Since becoming active in 1962, he has played in the horn line of Hagerstown Freestaters, Milton Keystoners, Westshoremen, Yankee Rebels and Reading Buccaneers.