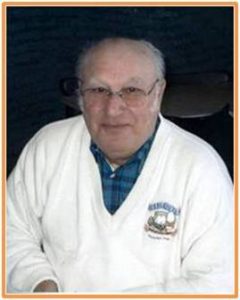 Norman Corrieri made a big impact at both ends of his drum corps years, playing a horn in three groups at the same time in the late 1940s and performing with three alumni corps at the same time before retiring from performing. He remained active with various alumni groups, Drum Corps Alumni Maryland (DCAM), Great Alliance of Seniors (GAS) and the Dixie Stinger indoor stage concert. He started as a drummer in the Public School 98 drum corps, then joined the Independent Order of Odd Fellows (IOOF) Scarlet Raiders, followed by Tall Cedars junior corps, performing with all three from the late 1940s to the mid 1950s. He moved up to the Walbrook Silverliners in 1954 while also playing trumpet in the Polytechnic High School marching and concert bands. When the Silverliners folded in 1957 he joined Towson (Outlaws) Troubadors. When Troubadors folded, he moved to the Yankee Rebels. He helped form the Yankee Rebels alumni, holding every office and serving as president for three years from 1974 through 1976. He wound up his performing years in the horn lines of Yankee Rebels Alumni, Archer-Epler Alumni and Skyliners Alumni. Away from drum corps involvement he was still on the field–coaching and officiating football at all levels from flag football through semi-pro activity, Towson University and University of Maryland, the Canadian Football League and the National Football League.