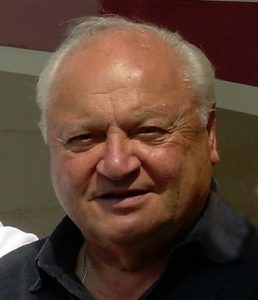 Joe Chizek Sr. has sustained his soprano sound from the mid-1940s well into the 21st century. After receiving his first trumpet and starting lessons in 1944 in Gloversville, NY, the southern gateway to the Adirondacks, he performed first with local groups, then with many of the best-known drum and bugle corps in the northeastern United States. He first played snare drum with Sacred Heart drum and bugle corps in 1946, then switched to bugle from 1947 to 1949. From 1949 to 1953, he played lead soprano for the Gloversville Yellow Jackets. From 1950 to 1953, he also operated his own dance band, but his music activities were interrupted by service in the United States Army from 1953 to 1956. Then, it was on to the contest field, playing solos as lead soprano with the Empire State Grenadiers from 1956 to 1959, Interstatemen in 1959 and 1960 and Archer-Epler Musketeers from 1960 to 1964. In 1964, he became soprano soloist with Utica Executives, followed by periods as soloist with Interstatesmen in 1965 and 1966, Fusiliers in 1966 and 1967 and Syracuse Brigadiers from 1968 to 1971. He performed as lead soprano with New York Skyliners from 1971 to 1974. He was assistant drill instructor for the Fusiliers during the 1960s, and taught horns and drill for the Patriots drum and bugle corps of Johnstown, New York, in the 1980s. He has been a lead soprano player with Skyliners Alumni since 1992. He helped organize Florida Brass drum corps in 1998, starting with small practice sessions at his winter home in Florida. The horn line has since grown to more than 40 players. He still plays lead soprano with Florida Brass each winter.