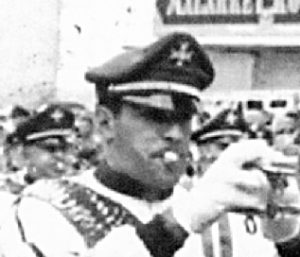 Mike DiMuro already loved the music of the Big Swing Band era when school friends invited him to a Ridge Culver Statesmen drum and bugle corps practice in 1953. He played soprano bugle with the corps through 1958. He was prompted to learn more about music and improve his performance level by Ridge Culver Statesmen instructor Lois Weibold, who continuously encouraged him by regularly adding new lesson plans to help him acquire higher skills. He performed with the Rochester Crusaders horn line from 1959 to 1965 as soprano soloist, including the Crusaders’ American Legion national championship performance in 1965. His original drum corps days ended when he joined the United States Army in 1966. He returned to drum corps activity in 2010, performing with Prime Time Brass ensemble. He has been a soprano soloist with St. Joe’s Alumni Corps since 2011.