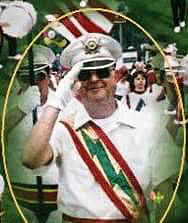 Victor Kulinski Sr. lost partial hearing in his right ear due to a childhood infection, but that didn’t prevent him from making music.  He joined his St. Mary’s School fife, drum and bugle corps in 1952 initially playing cymbals then switching to baritone horn.  When the church cut it ties to the corps, he was one of a group that approached the local American Legion Post in Torrington, Connecticut in 1959 to help form the Vagabonds senior drum and bugle corps.  For more than 10 years, he played baritone horn, marched as drum major, served as treasurer, business manager and director.  He simultaneously served as an administrator with the North East Drum and Bugle Corps Circuit.  When the Vagabonds went inactive in 1967 after a failed merger with Connecticut Yankees, he recruited heavily from area high schools to reform the corps which went on to compete in the Red Carpet Association.  After stepping down as Vagabonds’ director he joined the Connecticut Hurricanes color guard, becoming honor guard captain in 1985 after the passing of World Drum Corps Hall of Fame charter member Harvey Olderman.  He retired from drum corps activity in 1991 due to illness caused by diabetes.